The headache that comes back again and again. A chronic illness that knocks you off your feet without regard for where you’re headed or how much pain you’re already in.

The thought in your head that you are not good enough, no matter how hard you’ve tried. A lie, on repeat, that you can’t ever measure up or be worthy of love. Guilt that won’t subside.

The boss that never respects your time or how much has already been put on your plate on a tight deadline. A person who continues to abuse, even when ties have been cut.

What in your life is ruthless?

Some of these are mine. Some belong to my loved ones. Some are yours. There are others, too.

We all face the ruthless, that which is “without pity or compassion; cruel; merciless.”

Whose synonyms are “unrelenting, adamant, cruel.”

Isaiah 25:4 describes how it feels:

“the breath of the ruthless
is like a storm driving against a wall
and like the heat of the desert.”

Isn’t that the truth? That which is ruthlessly disrespectful, uncompassionate, and cruel in our lives feels like a tremendous force against us that we can’t flee from. It bears down on us like heat that cannot be escaped, draining us of our energy and our strength.

In Isaiah’s praise to the Lord, He describes how the Lord is our refuge. He goes on to say, in reference to the ruthless:

“You silence the uproar of foreigners;
as heat is reduced by the shadow of a cloud,
so the song of the ruthless is stilled.”

With just a moment of time and a compassionate thought in mind, our Lord makes cloud cover turn down the heat. He silences the storm thrashing us against the wall. He stills the ruthless.

After describing how the ruthless flourish, only to pass away and be found no more, the Lord reiterates in Psalm 37:39-40:

“The salvation of the righteous comes from the Lord;

he is their stronghold in time of trouble.

The Lord helps them and delivers them;

he delivers them from the wicked and saves them,

because they take refuge in him.”

What a refuge we have in Him! Never needing to hide or to fight a losing battle alone until we are left as empty heaps of nothingness. Endure, endure. Stay fast in the Lord because the wicked will not ultimately win.

The Lord is stronger, safer, and more steadfastly unchanging than any ruthless thing we face in this world.

Such sweet relief we find in the shadow of those unmovable, unshakable wings.

Remember the Gospel. The ruthlessness of sin, even now as it persists. Christ wins.

6 thoughts on “What in Your Life is Ruthless?” 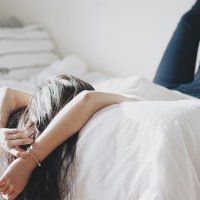